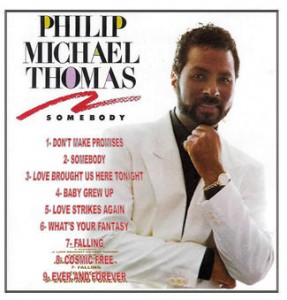 Philip Michael Thomas released his first album Living the book of my Life in 1986 and in 1987 he released his second album titled Somebody. In 1993 he co-wrote My, My, My Miam…I with Kathy Rahill and the song was chosen as the Miami’s city anthem. In 1999. 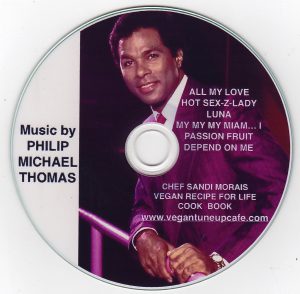 He became a Vegetarian in 1967 while he was a first year student at Oakwood College in Huntsville, Alabama and has enjoyed tasting food from great Chefs from all over the world.

Philip met Sandi Morais on the set of Miami Vice in 1984.  Sandi was a Pre-school teacher and a Fitness Instructor. They both shared a passion for living a healthy lifestyle, education, creative writing and theater.

Philip and Sandi collaborated on writing and producing their first original musical titled Sacha & the Magic Cooker Maker / Sacha on Broadway from 1999 to 2007.  They published five of their children’s stories in Sacha and the Magic Cookie Maker coloring story book with music and educational stories for children.

In 2003 Sandi became a Vegetarian and in 2008 Philip produced the music CD for her Recipe for Life Vegetarian cook book with five of his musical compositions, and he also did the photography for her book as well.  As Sandi continued to educate herself on the benefits of healthy eating she decided to change from being a Vegetarian to a Vegan and in 2014 she became a Vegan Chef. In 2016 Sandi launched her www.VeganTuneUpCafe.com on line and in 2017 she updated her recipe book with new vegan recipes and changed the name of the book to Vegan Recipe for Life cook book.  Philip did the photography of the new recipes.

Now, Philip Michael Thomas FANS from all over the world can own a copy of Philip’s music CD when  they purchase the Vegan Recipe for Life cook book and enjoy listening to All My Love (sensual reggae), Hot Sex-Z-Lady (Salsa), the Original Miami City Anthem My My My Miam…I , Passion Fruit (R&B) and You Can Always Depend On Me (Country Rock).

If you want more information about the music of Philip Michael Thomas, please email your request to pmt@philipmichaelthomas.info